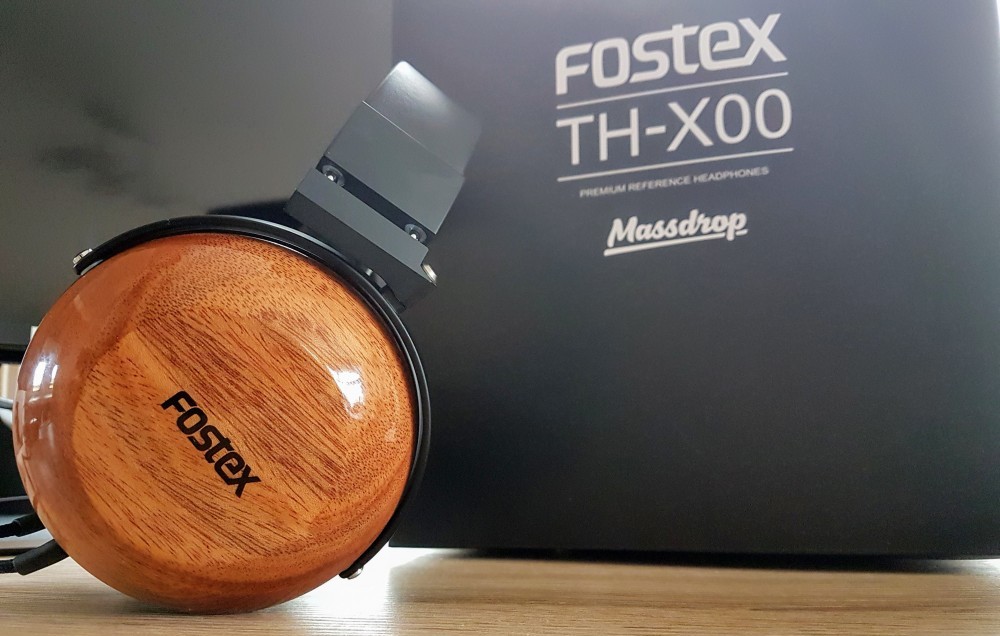 Back in 2015 Massdrop and Fostex joined forces to create the Fostex TH-X00 Closed Headphones, as a response to a request for a successor to the Denon D5000, by the audiophile community. And this – being Massdrop of course – for a very competitive price.

While the first iteration, the one I’m going to be talking about, came with Mahogany wood earcups, the collaboration was such a success, that extra editions soon followed.

The second being the Purpleheart edition followed by the Ebony edition. And frankly, I wouldn’t be surprised if other wood combinations become available in the future!

The TH-X00 sports quite a sophisticated look with its beautiful glossy mahogany wood cups.

While I do get the impression that the wood itself is very thin, it certainly does not take anything away from the overall quality. In fact, I can only see this as a positive, as it contributes in keeping the TH-X00 a very lightweight headphone.

Moving on to the earpads. Fostex opted for matte black leatherette earpads, made out of eggshell proteïn, which is supposed to recreate the feeling of hi-grade leather while being soft, breathable and durable.

The pads themselves have a nice thickness and are oval shaped which creates a snug fit around the ears.

That same snug fit is probably going to be a bit too tight for some people, as some part of the ears could touch the outside of the pad, which could potentially put too much pressure on the ears during longer listening periods. I myself however, did not experience any issues whatsoever over multiple hours of continuous wearing these.

Fortunately, the clamping force of the TH-X00 is very mild and completely the opposite of, for example, a Sennheiser HD 650.

When looking at the thick and braided cable I immediately noticed one of the few disappointing things I could find on these headphones. Let me try to explain.

The cable is of high quality. I mean, just looking at it with its big 6.3mm gold-plated audio plug oozes premium audiophile stuff. But the problem is that it’s not very flexible, meaning it will tangle up from the minute you put these cans on.

Furthermore, being non-removable and 10ft long doesn’t help either. However, to be honest, the length issue can easily be solved with a velcro strap.

A 6.3mm to 3.5mm converter is included to accommodate, according to Fostex, the use of portable devices. But frankly I can’t see anybody use these cans with their smartphone.

And even on laptops, please don’t use the included converter, as it will, in combination with the hefty plug, eventually put too much pressure on the audio jack. So unless you want it completely destroyed over a time, use a flexible adapter like this one from Sennheiser.

Before we go into detail about how the Fostex TH-X00 actually sounds, I have to tell you that this particular Fostex comes from the people at Sonarworks.

If you’re unfamiliar with what Sonarworks does, I can tell you in a nutshell, that they’re a company which provides software for speaker and headphone calibration.

They also have a few headphones in stock, which when ordered, are sent to their HQ for individual calibration to be as neutral sounding as possible (there’s a +/- 0.9dB accuracy).

They provide a personalized profile which you can load into either True-Fi or Reference 4 software packages, both which can be downloaded from their website.

As I recently did a review of their True-Fi software, I decided to take the plunge and order the Fostex TH-X00 from their online shop, which was a steal for under $270, even beating the Massdrop $399 price by a great margin!

Unfortunately, you’re in bad luck if you still want them as they’re sold out at the moment.

Sonarworks includes a lot of calibration files with Reference 4 and True-Fi. In the charts below I’ll show you exactly what the difference can be compared to an individual calibrated headphone.

The above Frequency Response curve is the result of multiple mono measurements from various Fostex TH-X00 headphones, of which Sonarworks has taken the average result.

For example, if you would take 20 TH-X00 headphones and measure them, you’ll notice that none of these headphones will have exactly the same FR curve. This is due to slight variations in the manufacturing process.

Although both charts have strong similarities, you can clearly see the difference.

This individual calibrated profile has stereo calibration (vs mono calibration on the average profiles). Notice the difference between the Left and Right audio channel.

The Fostex TH-X00 is what’s called a V-shaped headphone, meaning that the low-end and the high-end are more emphasized than the mid-range.

Being a Massdrop exclusive, the TH-X00 is derived from the more expensive TH-X601 and TH-X900.

While these two are more extreme V-shaped headphones, the TH-X00 is more nuanced, meaning that while still clearly being V-shaped, it’s more to the neutral side of things.

After actively listening for a few weeks to the uncalibrated sound, I have to admit, I’ve become quite fond of the sound signature the TH-X00 provides and it didn’t matter which music genre I was throwing at it. The TH-X00 handles everything from EDM / Pop / Rock / Classical / Jazz…

Bass performance is very good, being fun and punchy without becoming bloated. The elevated bass gives some nice slam to the tracks you’re listening to without going overboard.

Now the thing with v-shaped cans is that the mid-range tend to take the backseat, but not so with the TH-X00. Vocals and instruments are clear and crisp and although they’re a bit pushed back, it doesn’t feel like that. That’s why I said that the v-shape is more neutral.

However, with certain vocals and recordings, sibilance is still present as treble can be a bit high from time to time, but not so to the extent that it becomes annoying or too fatiguing.

Stereo imaging was another thing that felt remarkably good on the TH-X00, something that’s clearly audible in Ennio Morricone’s Gabriel’s Oboe and – something more recent – Issues by Julia Michaels.

All in all the uncalibrated sound is – for a V-shaped headphone – more to the relaxing and smoother side, while still providing the listener with an energetic high-end and enough kick in the lows to really absorb the musical experience.

I deliberately did not listen to the calibrated performance for weeks because I wanted to have a clear understanding of how the stock performance was, without becoming influenced by the neutral calibration.

When I did finally turn on the calibration, making it as neutral as could be, I was in shock. And no, not in a good way…

First I thought I had done something wrong, so I immediately checked if I had selected the correct profile. Even re-loaded it again, only to conclude that everything was set-up correctly.

The sound became overly dull and lifeless. Subjectively feeling, it was like going from Hi-Res FLAC audio to Low-Res 96kbps mp3 quality.

This was the complete opposite experience than I had with my previous tests with the Sennheiser HD 598 & 650 and the Audeze LCD-2. These three headphones actually came more alive and fun to listen to.

Then I realized what the problem was. My ears were so accustomized to the beautiful smooth “non-neutral” V-shaped stock sound, which I had been listening to for the past few weeks, that jumping back and forward was not a good idea.

I needed to somehow reset my ears, so I stopped listening for a few days to the TH-X00 and any other headphones. After a few days, I put the TH-X00 back on, loaded the Sonarworks neutral profile and started listening…

My second attempt at listening with the Sonarworks profile applied was much better. Gone was that subjective feeling of listening to a low-res audio track and everything sounded quite nice and balanced actually.

Bass levels were toned down a lot but sounded much more realistic, and more importantly, still had enough slam to make you feel the bass with some slight rumble in the lower end.

Listening to the Game of Thrones theme by Ramin Djawadi lets you hear the rumble of the Taiko drums without becoming too dense or too flat.

Vocals sounded a lot more neutral and totally absent of any sibilance.

Being a closed headphone the TH-X00 sounds surprisingly open, both uncalibrated as calibrated.

The overall experience wasn’t all that thrilling and frankly, it sounded more like my Sennheiser HD 650, although not identical, as the HD 650 has this liquid and creamy magic going on, while the TH-X00 sounded a lot dryer.

A completely neutral sounding headphone can be a sobering experience, I’ve learned.

Much of course has to do with the headphone itself as this was the first V-shaped headphone that I’ve tested with the Sonarworks software. All the previous tests were with open headphones. So hopefully more to come!

And if I reflect back on the whole process, this felt more like a Dr. Jekyll and Mr. Hyde experiment to me.

However, there’s no doubt that the TH-X00 is an amazing headphone, both calibrated as uncalibrated.

The Sonarworks calibration (Mr. Hyde), in all honesty, gives the better representation of the music.

On the other hand, the stock mode (Dr. Jekyll) feels a bit like stepping out of the social boundaries and giving in to some of our deeper and darker desires…

Price wise these are definitely worth it, even if they’re not available anymore at their original Massdrop $399 price-tag. The PurpleHeart and other editions are regularly being dropped between $449,99 and $499,99, which is still a great deal!

I’m gonna sign off with a few last words on the stock performance, as it is the soul of these bad boys.

Being a fun and engaging sounding headphone, the Fostex TH-X00 is a joy to listen to. Totally not neutral and even a bit naughty, but that’s kinda the whole point…