Back in 1991 a guy named Axel Grell joined Sennheiser to work on what would become the Genesis headphone of a series of headphones that as of today are still considered as a benchmark to test other headphones to; the HD600 and HD650.

So what was this headphone that started it all almost three decades ago? The Sennheiser HD580 Precision.

Because of its historical importance and the fact that audio lovers adore this headphone, Sennheiser and Massdrop decided to create the HD58X Jubilee. And as icing on the cake, they even got Axel Grell involved in the tuning process. 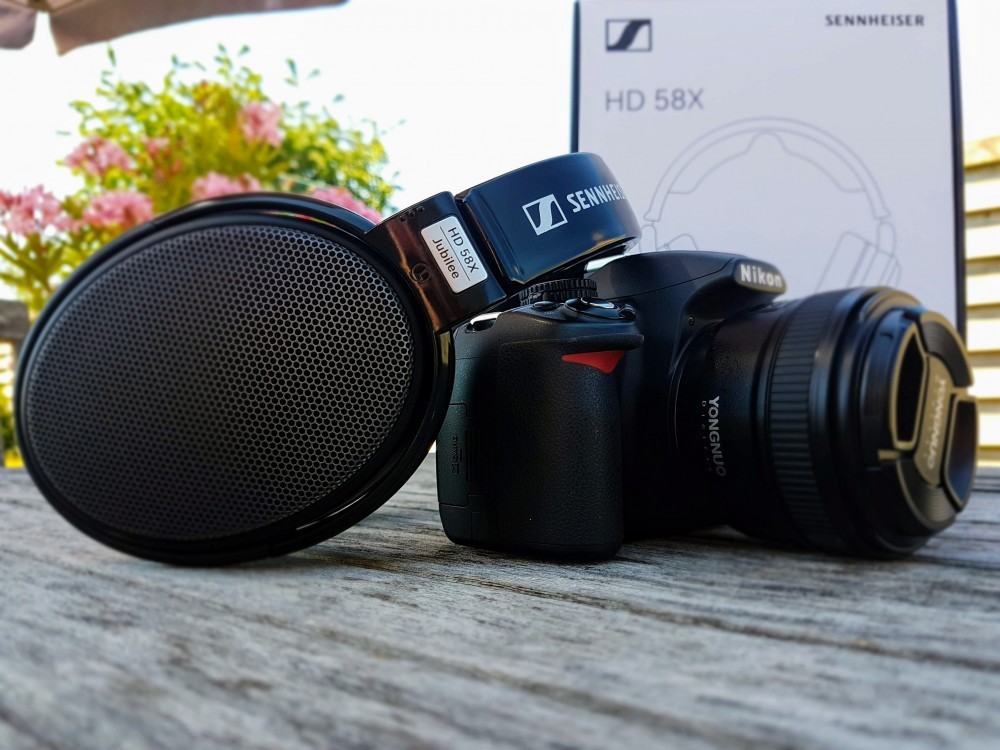 Being a tribute to the HD580 it is only normal that the HD58X looks practically the same. Sennheiser clearly used the same mold here, and the only differences to be found are cosmetically and a different kind of grills.

The HD58X sports a black paintjob which for most of the part is glossy. The earcups are matte, as is the lower part of the frame that holds the earcups. The speakergrills are grey and as a whole it gives the HD58X a clean minimalistic look.

On top of the headband there’s the Sennheiser logo and name. Speaking of branding, both left and right sides are labeled “HD58X Jubilee” and on the inside of the size adjuster you’ll find the serial number and the Massdrop branding. 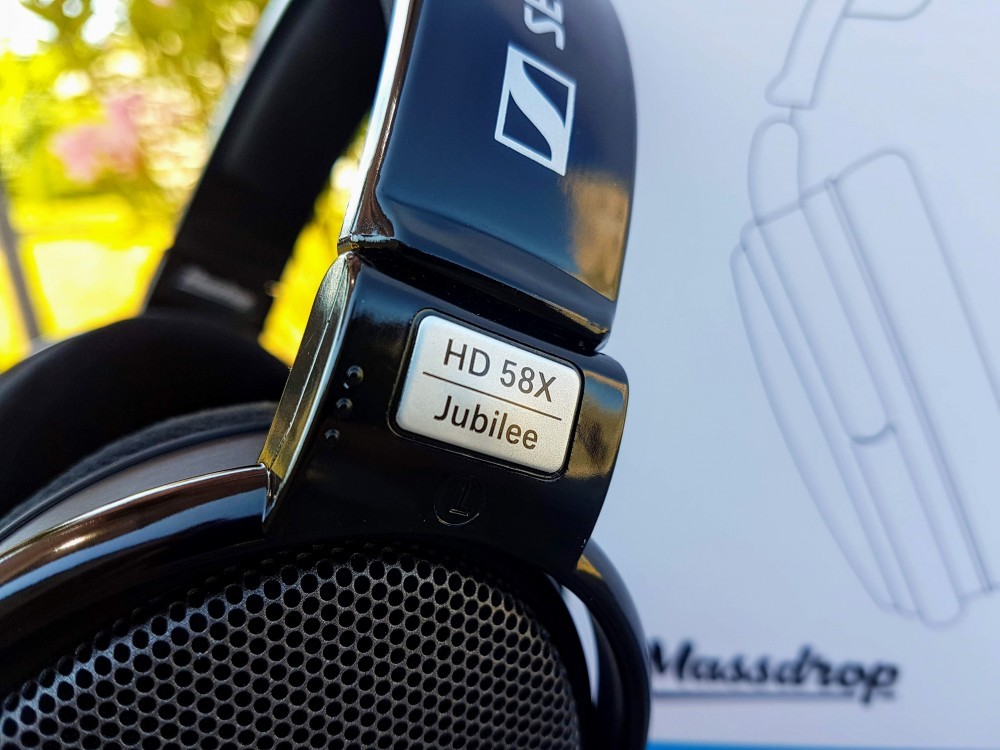 The padding on the headband comes straight from the HD650 and its successor, HD660S. In fact, the HD58X looks suspiciously close to the HD660S and from a distance, they could be mistaken as twins.

Although it’s primarily made out of plastic with only the speakergrills and the size adjuster being made out of metal, I can’t say anything bad about the build quality. This design has proven itself since 1991 and Sennheiser still applies this to its premium audiophile headphones.

I know it’s not using the finest earth materials but this is not that kind of headphone. You don’t appreciate it because of its looks, nor will you impress your friends with it. 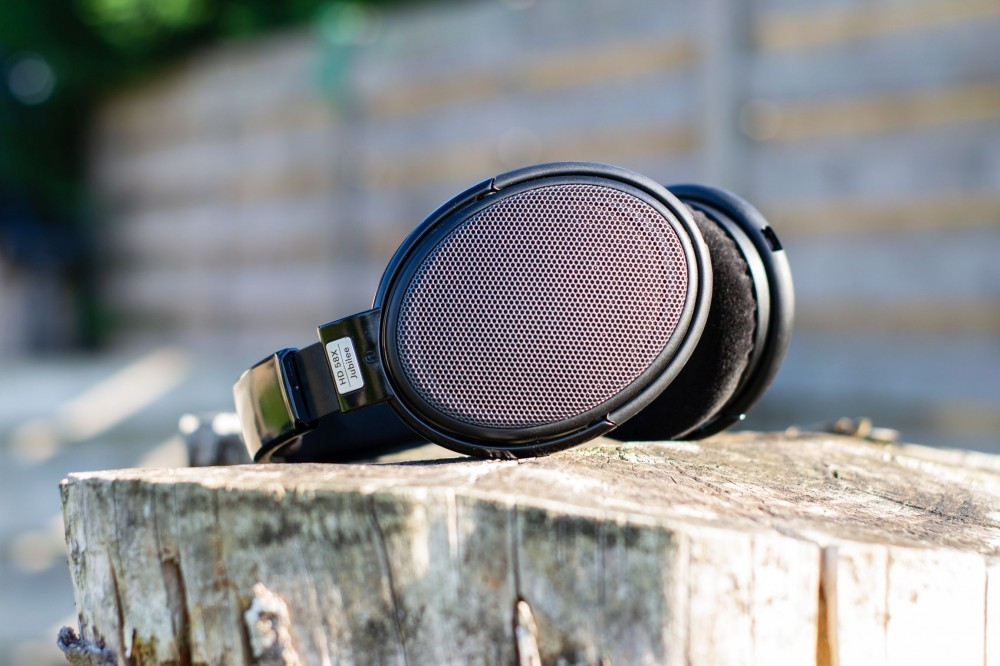 These are made to last and therefore you can literary drop these cans on the floor, without the fear of them disintegrating into pieces. You don’t have to baby them, although I’m the kinda guy who does exactly that. 🙂

Anyway, my point is that these are rugged and can withstand the typical abuse that could happen in a professional studio or if you’re the type of person who easily breaks things, unintentionally of course…

If you have or tried one of the other HD6XX siblings, then you know what to expect comfort wise from the HD58X. For those who’ve not had the pleasure, let me tell you I haven’t found any real issues in that department.

The black velour pads are thick and big enough to fit my whole ears in and they’re not touching the inner-part where the foam is. They’re not quite as comfortable as the DT770 from Beyerdynamic or as soft as the Sennheiser HD598, but still, you can’t really complain as the comfort level and quality is good. 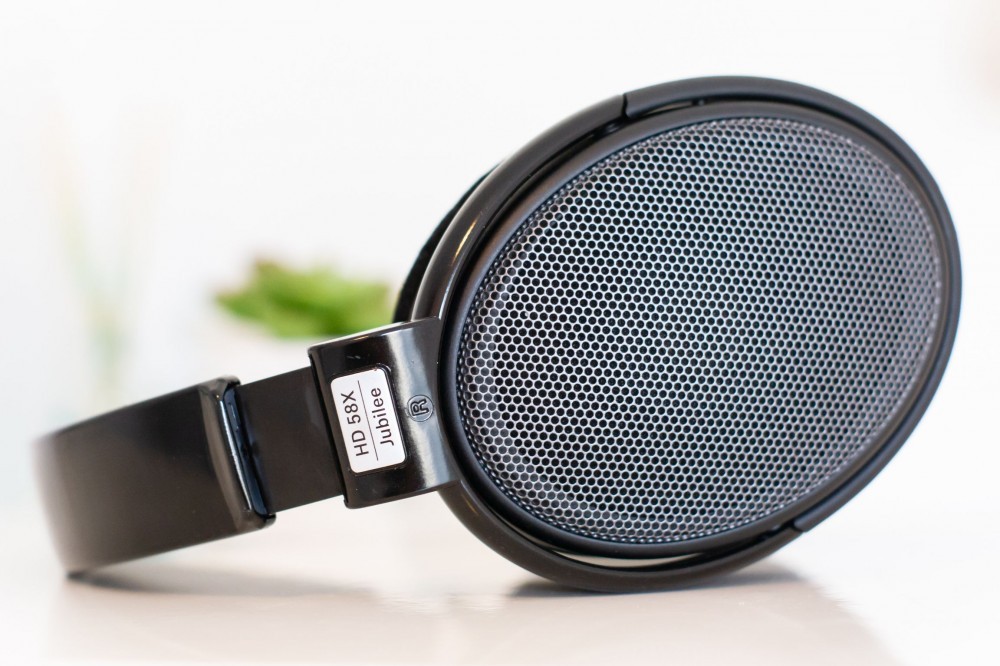 The padding on the headband does a great job to release any pressure on the skull and accompanied by the lightweight (hooray for plastics!) of these cans I had no issues to keep these on for several hours.

The only negative point I detect could be the clamping force. This is typical for the HD6XX range and although it doesn’t really bother me as I have a narrow head, I can see this becoming an issue with others. Luckily there’s a solution to this.

You could carefully stretch the headband by putting the headphone on a shoebox for, let’s say 24 hours, and see if this helps. My HD650, which I bought second-hand, is noticeable more stretched, so I know this little trick works.

So how do these sound? For starts, I can say that they do not sound like the original HD580. While the HD580 sounded rougher around the edges and trebly, the HD58X’s sound signature is much more refined and a tad calmer on the high end of the spectrum.

Testing is done with the AudioQuest DragonFly Red DAC + JDSLabs Objective2 Amp and the standard 1.8m cable with a 3.5mm TRS jack. Bass quality is really good and I feel it even gets the upper hand on bass extension to the more expensive HD650, so the HD58X is certainly no slouch and sounds a bit beefier than the 650’s. It’s not the pumpin’ thick bass you get from a high-end closed headphone, but what you do get is a quality enjoyable low end that is great with anything.

And when I say quality, I mean a clean effortless low end that does not muddy up into the midrange whatsoever. Really nice and tight!

Again, these cans keep on surprising me with their clean and beautiful sound signature.

The low end compliments the midrange perfectly providing the HD58X of the necessary oomph, which makes everything so clear, but still deep and strong.

Heading into the highs, the HD58X manages to keep its posture effortlessly. No crazy spikes here or eerie shrieking ‘S’ sounds. Nope, Sennheiser nailed it again as it did with the other frequencies.

Compared to the HD650 which has a more nuanced higher end, the HD58X applies a more lively treble range, but still without losing control.

This being said, if you’re more accustomed to the treble of, let’s say, a Beyerdynamic headphone, you’re probably gonna be a bit disappointed.

Do these have the widest soundstage? No. They’re not in the range of the HD800 or even the HD598. They do however compare with the HD650 in that aspect.

Although not the widest, in fact they sound quite intimate for an open headphone, the placing of the instruments is very realistic. Something that always bothered me a bit with the HD598, which has the tendency to do some weird voodoo on placement sometimes… 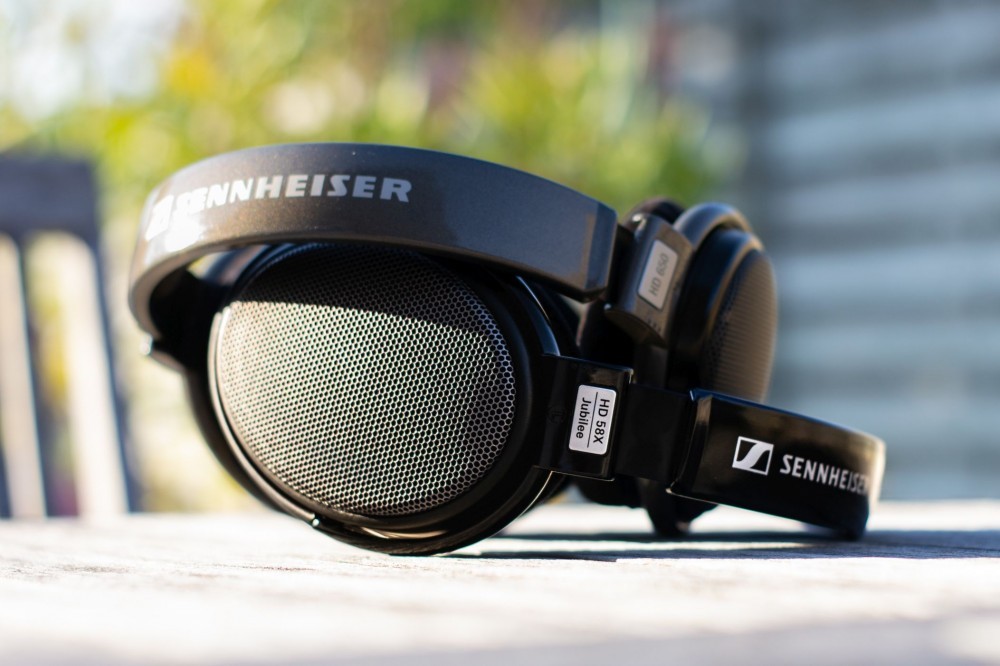 Does the HD58X Require Powerful Amping?

So no need for powerful amping here. Although I do recommend at least a nice portable dac like the Dragonfly Red if you’re serious about getting the maximum out of these cans.

Compared to the HD600 (neutral) and the HD650 (warmer), the HD58X is a more accessible headphone that leans a bit more to the bass side of the sound spectrum. It’s not as fun and in your face as the original HD580, but more of a sweet blend of serious and fun. 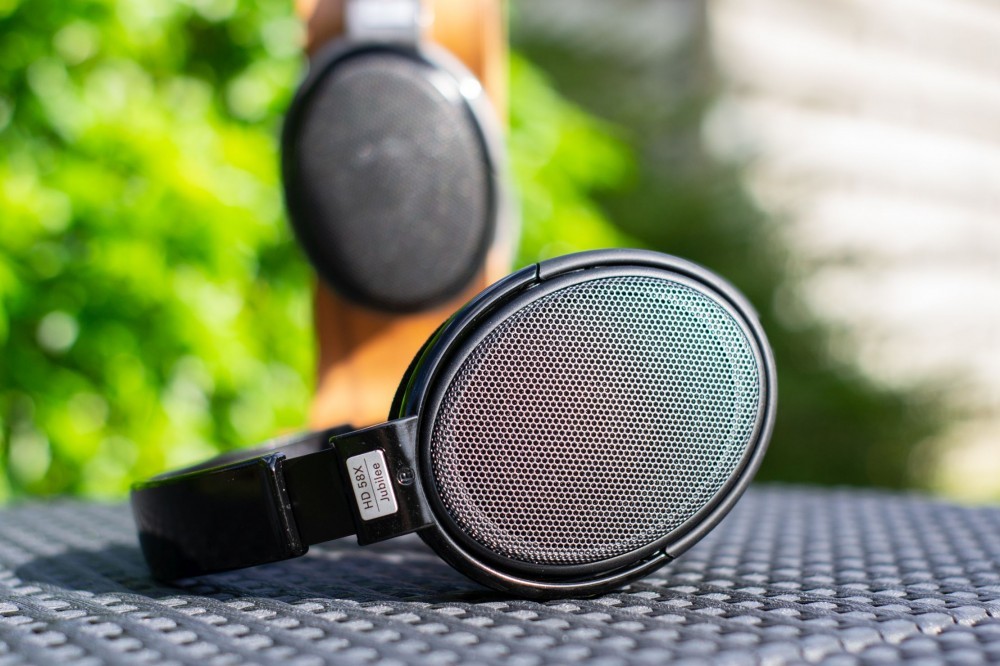 You could sit there in your posh handcrafted listening chair enjoying the finest single malt while playing some Miles Davis – Kind Of Blue, while the other day you’re doing some virtual clubbin’ on the tunes of Armin Van Buuren or Martin Garrix. The HD58X handles different situations quite well.

I already told you that the HD58X uses 150Ohm drivers as does the HD660S. However, both are not the same as this is proven and documented by Solderdude (DIY Audio Heaven).

I know that there are many who believe that they both share the same driver and indeed if you inspect them visually, one might think they’re the same. I thought so too at first. But they’re clearly not.

Out of curiosity, I decided to pop out the grills to take a look at the actual driver, as this is not visible through the grills like with other headphones of the HD6XX range. 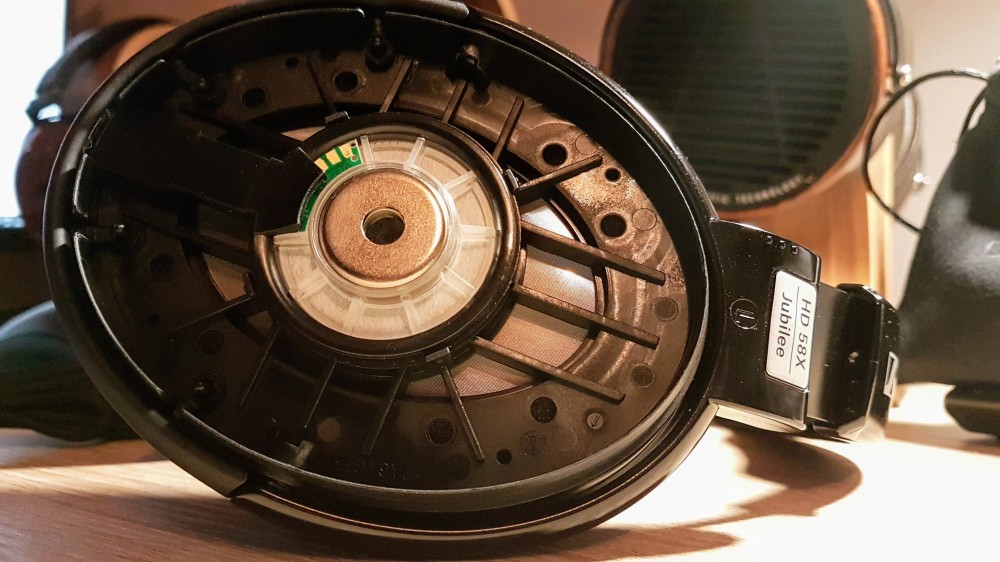 Sennheiser used a foam directly behind the grills to hide the drivers, which is according to Sennheiser done purely out of aesthetic reasons. But could it be that this foam actually applies a dampening to the sound signature? 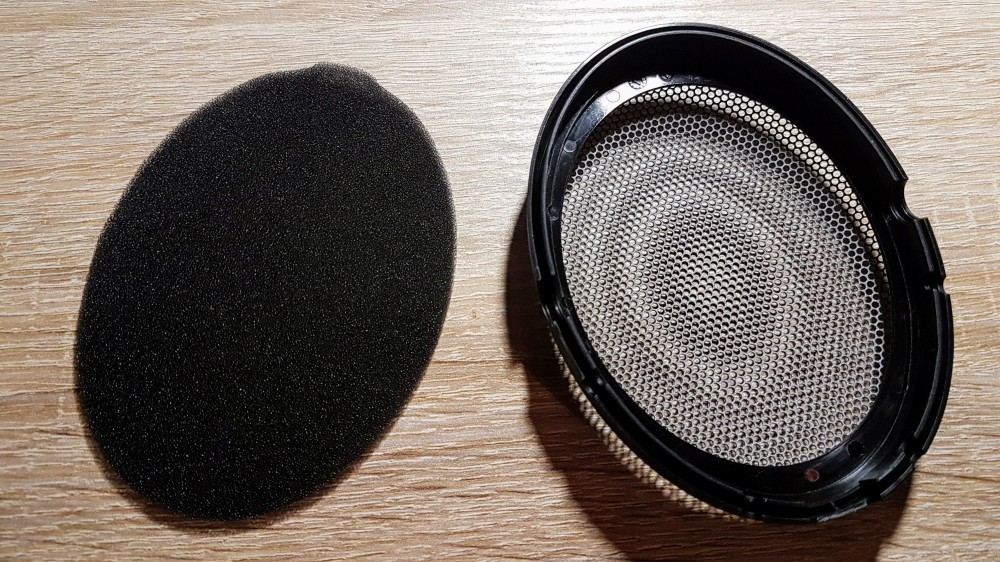 How Does it Sound Without the Foam?

Sennheiser claims that the influence of the foam to the overall acoustics is ‘minimal’. I tend to agree with this, but I still want to express my personal findings.

I went back and forward several times with multiple tracks in high resolution audio format and I could not shake off the impression of an increase in airiness without the foam.

Some tracks I used for testing:

I did not notice any degradation in bass quality, but did notice some minor improvements in clarity with several instruments in the mids and highs.

One last thing to mention is that the absence of the foam did not introduce any sibilance. There’s just a tiny bit more sparkle.

There’s no doubt that the HD58X is an amazing headphone and is a great alternative to the more expensive HD660S. You get the same build quality and familiar looks as the rest of the HD6XX family at a fraction of the price.

Sure, you won’t get the premium packaging, instead you get a very cheap and uninspiring carton box. It’s an economical decision as it keeps the price down. And honestly, how many times have you admired the packaging of those expensive headphones? For me, these boxes quickly disappear somewhere in a closet. 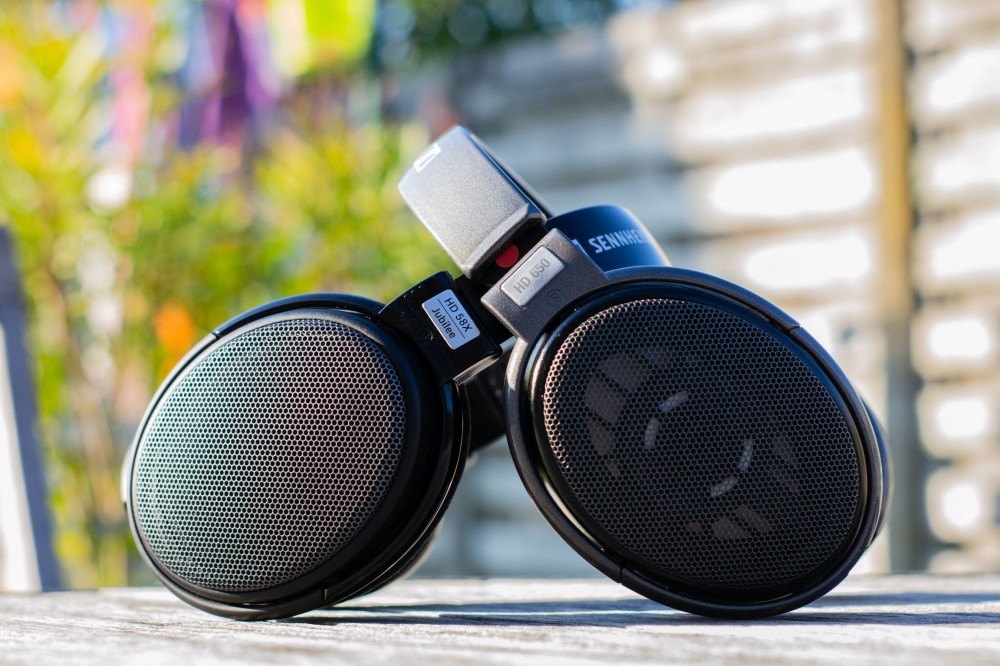 If you’re eager to see what a more serious headphone sounds like, but you’re not quite ready to shell out $500, the Sennheiser HD58X is a steal at only $149. I own the HD650 and although they sound a bit different from each other, I honestly cannot say the HD650 is better than the HD58X and vice versa!